A clutch of anniversaries and a roll of Gorilla tape

This morning's question, by definition do portholes have to be circular? I think so, the cabin window is a rectangle with rounded corners, through it I can see the silver grey Atlantic with a view of Finisterre on the horizon, but even given the distinctly nautical ambience I am convinced the thing I am looking through is a window. 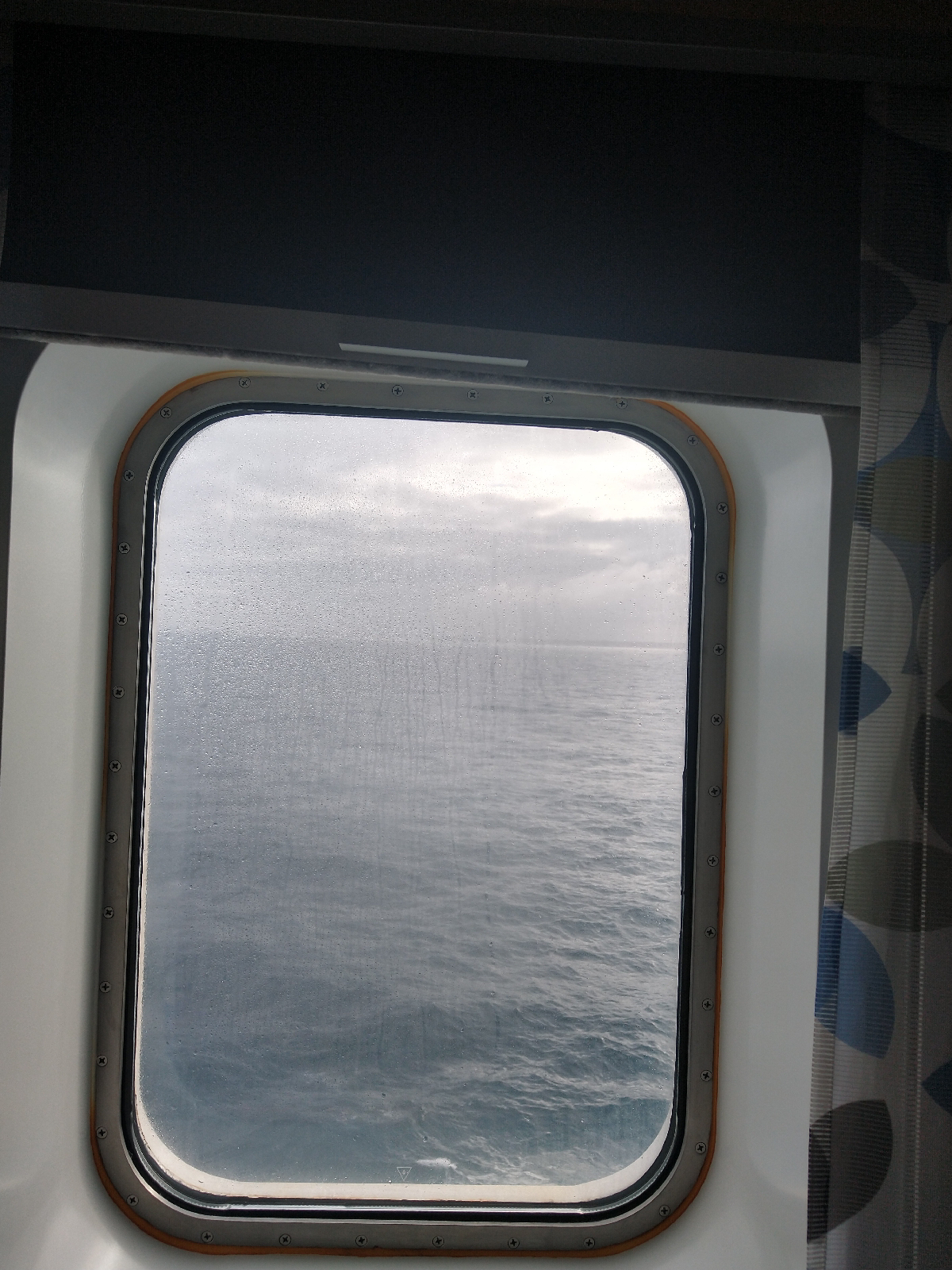 Reasons to be cheerful... the Bay of Biscay is being benign, we will be in Spain tomorrow morning, Seville by the end of the week, then free to wander as around Iberia as we wish until early April while the peninsula's paltry attempt at winter blossoms into a technicolour spring. Who would not be uplifted by the prospect?
However, I am feeling a tad pensive - about time passing mainly. Today - the last day of January - coincides with a clutch of anniversaries. The most significant personally is that it happens to be exactly ten years to the day since I finished work. It was all a bit awkward. Along with half a million other public servants our careers came to a sticky end as a result of George Osborne's 'austerity' economics. Gill was affected first in 2011 when she had reapply for her own job. She was successful but ended up doing the work of two people for the same pay - 'more for less' was the mantra of the time. I worked as a director in a small Further Education college. It became obvious that the only way to maintain courses locally and protect lecturers' jobs was to merge with a larger organisation. We managed to save the local provision but there was no place for most of the existing management team in the organisation that took over the college.
I decided to jump before I was pushed and 'retired' myself by seeking voluntary redundancy. Gill continued work for a further eighteen months under ever increasing pressure, I kept myself busy by studying towards an MA. Then, still in our late 50s, we realised our retirement dream. A semi-nomadic life was our plan, we bought our first motorhome and began to wander about Europe for months on end.
The blog was almost an afterthought but it grew along with our travels and will celebrate a tenth anniversary of its own sometime in June. At the beginning of our wandering life the prospect simply stretched before us, we never thought that there may be an end point. Ten years on this is no longer the case. Looking around at our fellow passengers - mainly motorhomers and caravanners heading for some winter sun - most are around our age or somewhat younger. There are a few septuagenarians, but none look to be in their late seventies. In truth with luck we may remain fit enough to travel the way we do for another six or seven years, then we will have to rethink things.
Some changes will be forced upon us earlier than that. In a couple of years my driving licence will no longer allow me to drive a vehicle over 3500kg, our current moho is heavier than that. The options are, have a medical to enable me to drive C1 type vehicles beyond my seventieth birthday, or swap the moho for one plated at 3500kg.
A different anniversary is making us lean towards the latter option. Five years ago today we bought our current motorhome. It still meets our needs, but it has been well used and for its age has a higher than average mileage. We have spent over 500 days living in it, some of fixtures and fittings are well worn and the exterior has a few chips and surface scratches. Should we trade it in later this year and swap for a more modern van plated at 3500kg? Financially it would be a stretch, but doable just about.
The final anniversary is all over the news channels - three years since we left the EU. What can you say? The sunny uplands were definitely the product of  collective delusion and every negative prediction of doomsters and gloomsters and other sundry remoaners have come true. Sadly, being proven correct is no consolation whatsoever.
We are heading off now for our 'free' Brittany Ferries dinner, a small perk given the return fare was £1100! Still, we arrive in Spain first thing tomorrow and at a stretch could conceivably get from Buxton to sunny Seville with three sleepovers, actually we'll probably take it a little easier than that.. 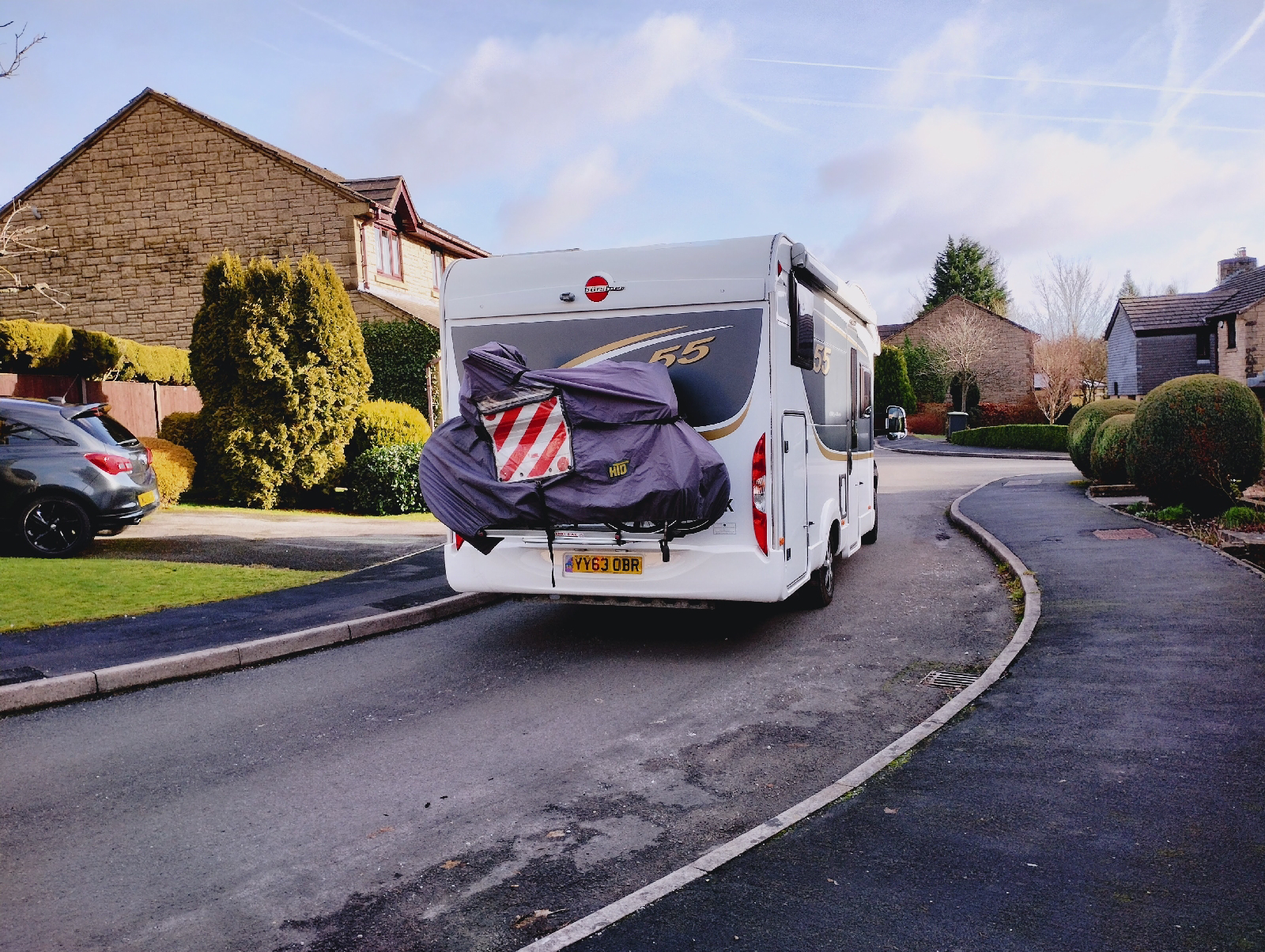 So far as the Gorilla tape is concerned - it's the result of a last minute complication. I managed to remove part of the rear lower pvc bumper while reversing out of the storage place. 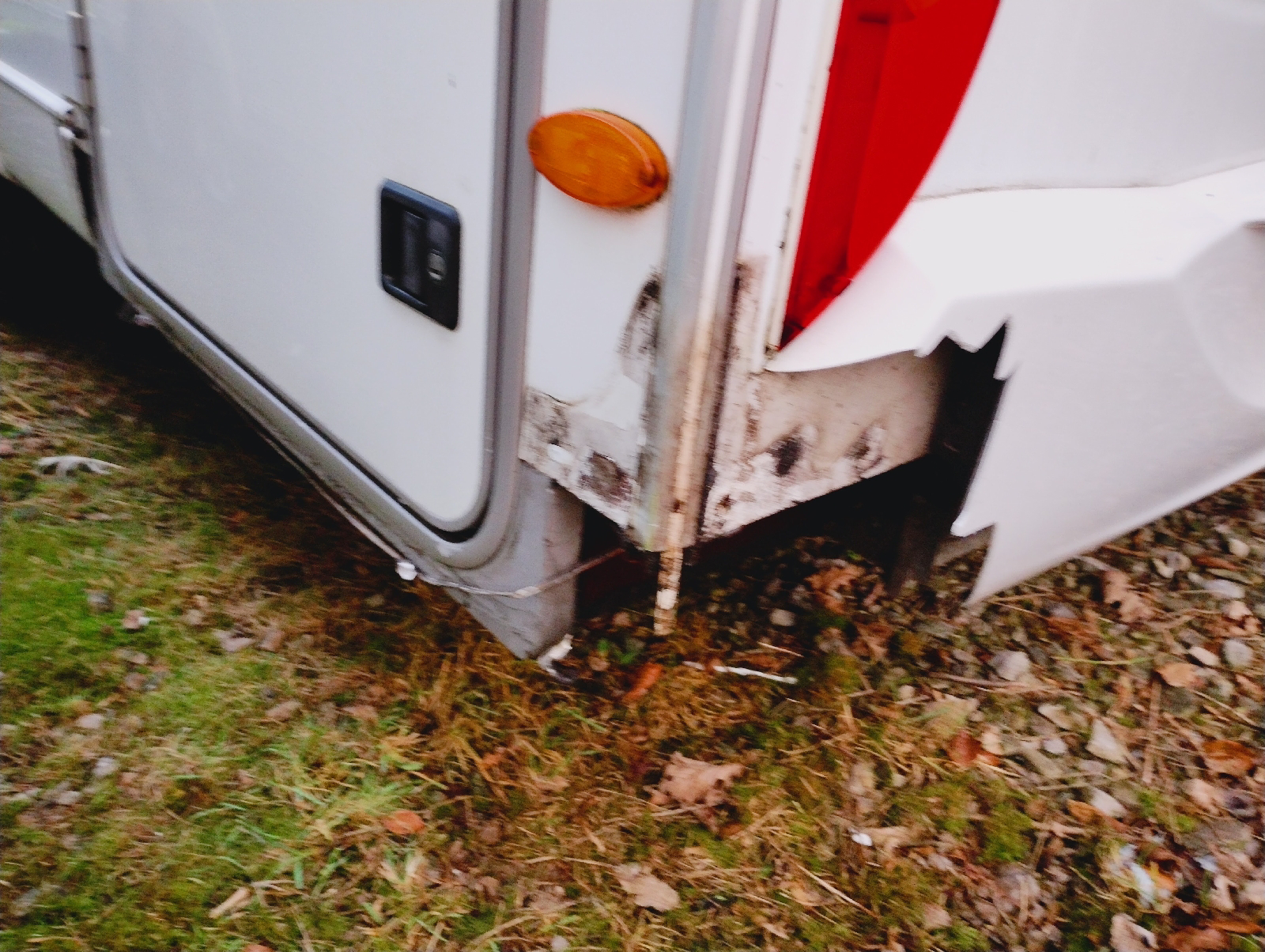 Very annoying, but Gorilla tape is a wonderous thing and the van is now taped back together until we can get it fixed properly when we return in April. 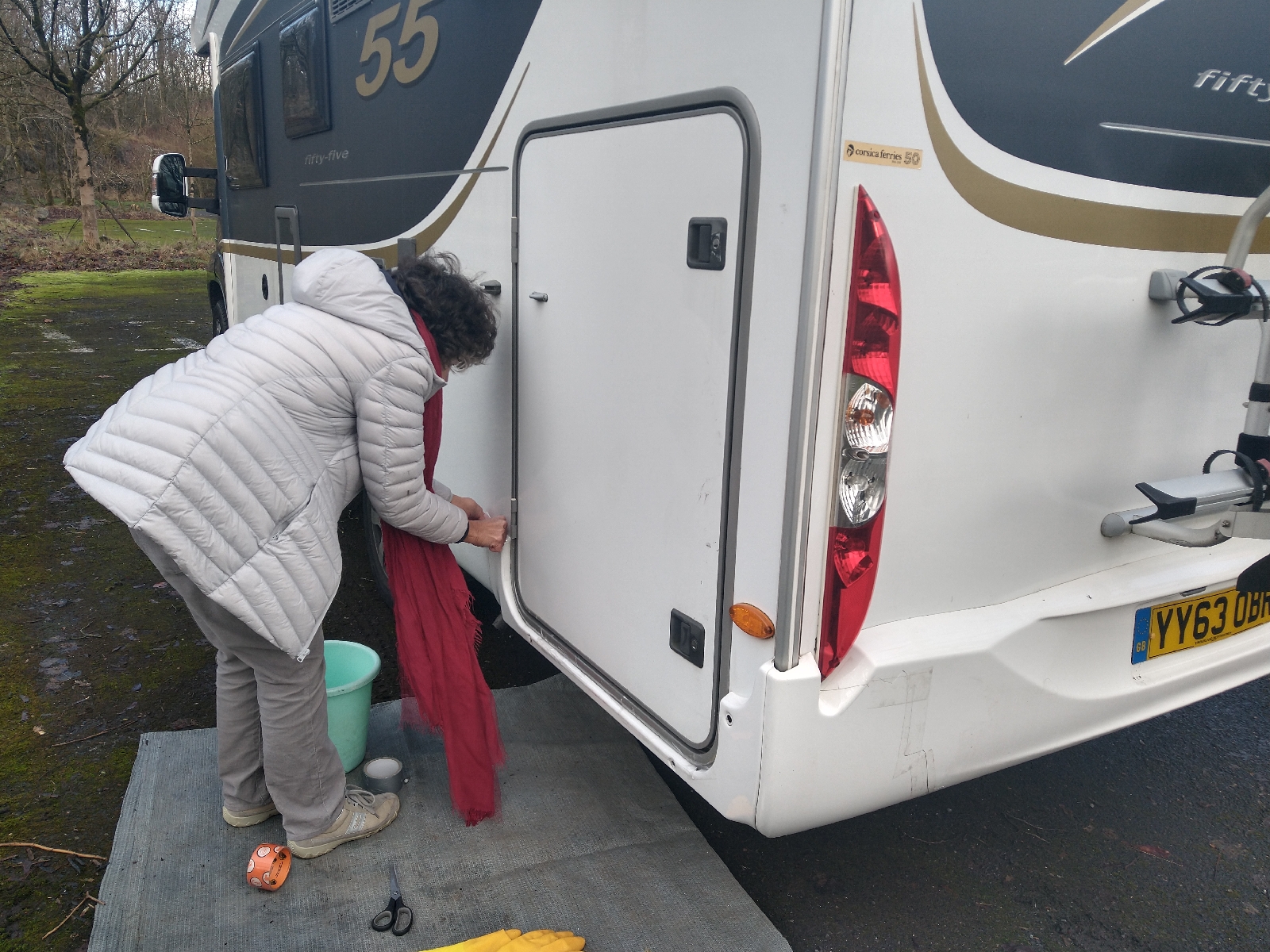 Meanwhile it's time to find some actual sunny uplands and beyond them a blue sea with bare hills and orange trees heavy with fruit, then westwards to the edge of Europe. Andalucia and Alentejo in winter - it's an alluring prospect.
Posted by Pete Turpie at 08:26 No comments:
Email ThisBlogThis!Share to TwitterShare to FacebookShare to Pinterest
Older Posts Home
Subscribe to: Posts (Atom)

This week back then

Seville - city of flamenco and tendinitis.

We think this is our fourth visit to Seville. It's an interesting city with a rich and complicated history so we always manage to do s... 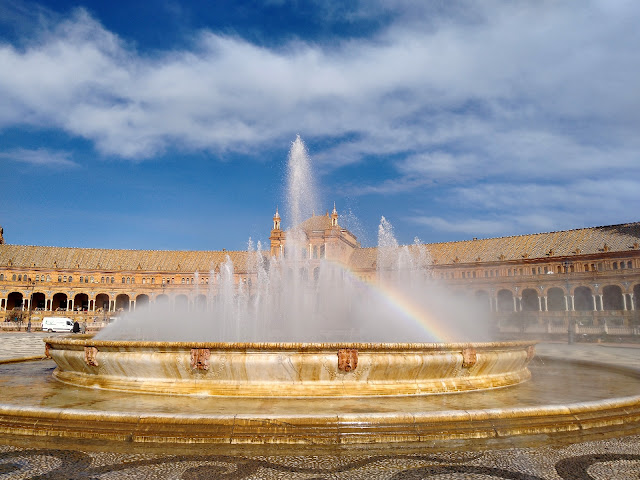